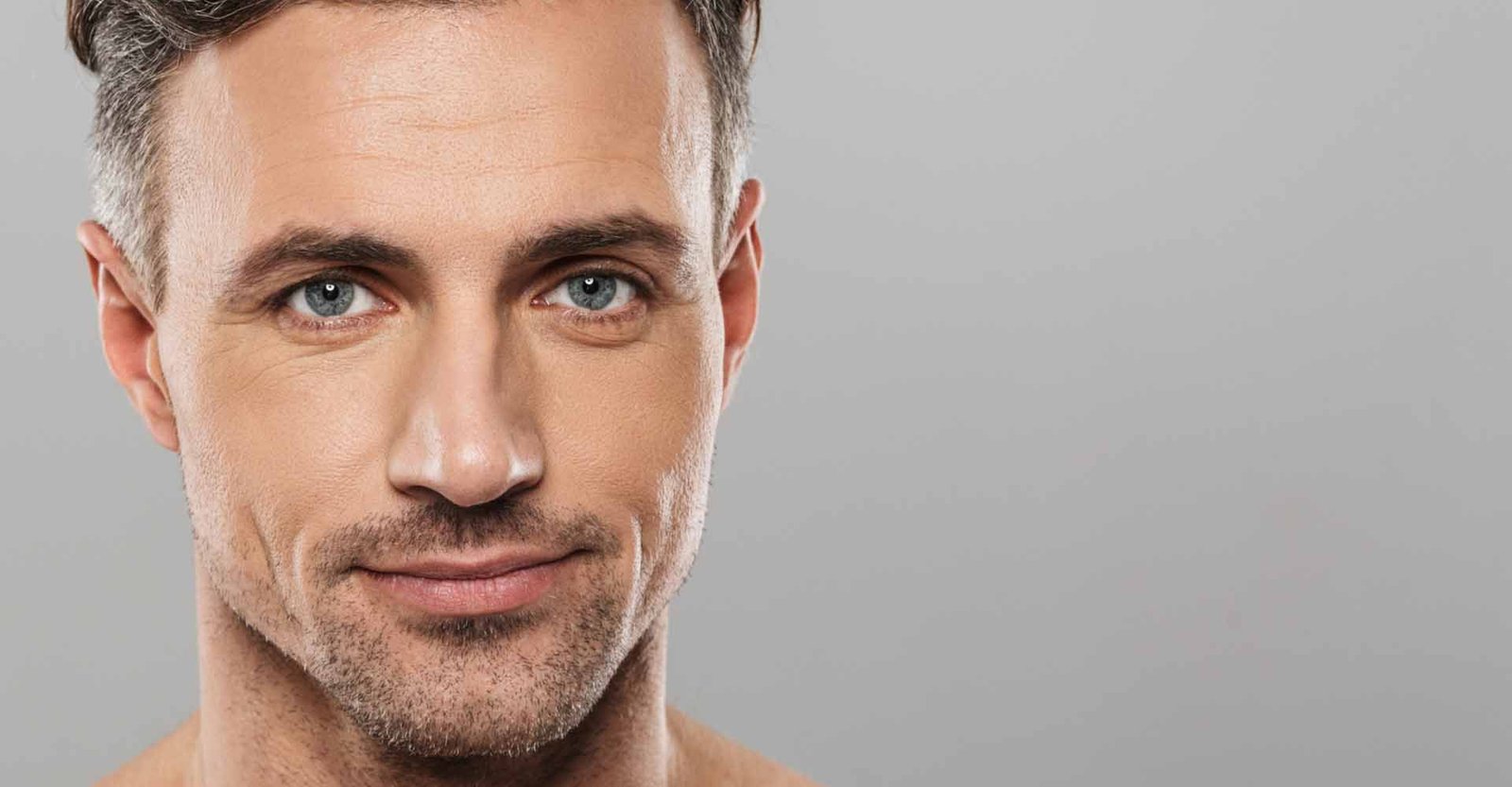 Our recommended surgeons routinely perform facelifts on both men and women. In this article, we will address the concerns that men, in particular, have when considering a facelift surgery.

What is a Facelift for Men?

A facelift is a popular cosmetic surgery that restores a youthful appearance to the face by lifting the skin and muscles on the lower half of the face in order to tighten the skin and smooth out signs of ageing such as wrinkles, saggy skin, and jowls.

The facelift procedure for men slightly varies from that of women due to variations in anatomical structure. For example, men have thicker skin, larger and stronger skeletal structures, and more prominent facial hair. Therefore, a surgeon will face different challenges and use different techniques when performing a facelift on men.

There are several slight differences between the way a surgeon performs a male and female facelift:

Is a Male Facelift Worth It?

Many men consider a facelift to be a worthwhile cosmetic surgery as it resolves a number of aesthetic concerns:

As we get older, the skin around the face and neck loses its elasticity and begins to sag. As a result, men develop wrinkles, jowls, a saggy neck, and lose definition in other facial features.

The ageing process varies between individuals, and each patient may need a different type of facelift or a combination of procedures to achieve their desired outcome. However, all facelifts correct the laxity in the deeper structures of the face, making it the most effective solution to address facial ageing.

Another common occurrence of ageing is the development of excess fat around the chin, neck, and jawline (commonly known as jowls). The pockets of excess fat occur as the skin becomes increasingly lax and can no longer support the structures of the face. By pulling the skin upwards and backwards, a male facelift repositions the excess fat and restores definition to the face.

Wrinkles and folds develop in the face and neck area due to ageing, sun damage, and other lifestyle factors. There are different types of wrinkles that occur in different areas of the face as a result of different causes.

Upon an assessment, a surgeon will decide which type of facelift or other treatment is most suitable for addressing the specific signs of ageing in your face. For example, a deep plane facelift can specifically address smile lines and nasolabial folds while providing a more prominent and natural result than a standard facelift.

A double chin, also known as submental fat, is an accumulation of excess fat beneath the chin. It can develop due to a range of factors, including genetics, fluctuations in weight, and skin laxity as a result of ageing. A facelift for men removes a double chin as the surgeon can remove the excess fat, tighten the muscles in the area, and restore a contoured appearance to the chin and jawline.

However, after assessing you, your surgeon may suggest other more suitable procedures such as liposuction for removing your double chin.

If an experienced plastic surgeon performs a facelift, it will look completely natural. Since each individual ages in a different way, your chosen surgeon will design a bespoke solution that addresses the signs of ageing that are specific to you in order to achieve an aesthetic outcome that looks natural. This may involve combining a facelift with other procedures, such as a brow lift, for a more natural result.

The cost of a male facelift depends on the type of facelift that you undergo and the nature of the bespoke solution designed by your surgeon, which may involve additional treatments. However, below are the average prices in the UK for each type of facelift:

A male facelift procedure for each patient, male or female, varies due to the differences in facial ageing and other aesthetic concerns.

Typically, a facelift addresses the mid to lower region of the face. The surgeon will make an incision that starts at the hairline in the temple, extends along the front of the ear, and ends behind the ear. This gives the surgeon access to the deep structures of the face, which enables them to tighten the muscles of the face and neck, lift up and reposition fat pads, and recreate the patient’s facial features, such as the sharp angle between the jawline and the neck.

Your surgeon will use either the deep plane, Superficial Musculoaponeurotic System (SMAS), or Minimal Access Cranial Suspension (MACS) surgical techniques in order to perform the facelift:

The downtime for a facelift varies depending on the type of surgery you underwent. For example, the more invasive SMAS technique requires more downtime in comparison to the MACS technique. Typically, most patients are able to return to work in 2 weeks and can expect to make a full recovery in 4-6 weeks.

While a facelift is the most effective and permanent solution for achieving a youthful face, there are several other alternatives that might be more suitable for you. Factors worthy of consideration in choosing appropriate treatment include your cosmetic concerns, downtime requirements, and budget.

A thread lift, also known as a ‘puppet facelift’, is a non-surgical procedure that lifts and tightens the skin using sutures, thus producing the effects of a facelift. This cosmetic procedure is ideal for patients that have mild skin laxity and are as yet unprepared to surgically alter their face. Using a thread lift, surgeons are able to significantly tighten and contour the mid and lower face, including the jawline.

FaceTite is a minimally invasive technology by Inmode that uses radio-frequency (RF) energy to heat the collagen in the face and neck. In doing so, the treatment eliminates pockets of excess fat and contracts the collagen, thus improving areas of skin laxity for a more contoured and youthful face and neck, similar to the results from a surgical facelift. However, the results from a Facetite procedure aren’t as prominent, immediate, or long-lasting as a facelift.

Morpheus8 is a minimally invasive technology that utilises RF energy which stimulates the production of collagen to improve skin laxity in the face and neck. The Morpheus8 device contains micro-needles that deliver RF energy to targeted areas of the face in order to treat wrinkles, jowls, and other signs of ageing. While the Morpheus8 treatment doesn’t produce the prominent effects of a facelift, it significantly improves the tone and texture of the skin for a more youthful appearance.

Endolift is a minimally invasive technology that utilises laser energy to tighten and remodel the skin by stimulating the production of collagen while also removing excess fat deposits. Endolift is a needle-free procedure that treats both the surface (epidermal) and deeper (dermal) layers of the skin using a laser-optical micro-fibre. Therefore, it can help reduce severe skin laxity around the face and neck area for a more contoured appearance.

Make an Enquiry Request a Call Back

Get a £50 discount for your consultation.

We use cookies on our website to give you the most relevant experience by remembering your preferences and repeat visits. By clicking “Accept All”, you consent to the use of ALL the cookies. However, you may visit "Cookie Settings" to provide a controlled consent.
Cookie SettingsAccept All
Manage consent

This website uses cookies to improve your experience while you navigate through the website. Out of these, the cookies that are categorized as necessary are stored on your browser as they are essential for the working of basic functionalities of the website. We also use third-party cookies that help us analyze and understand how you use this website. These cookies will be stored in your browser only with your consent. You also have the option to opt-out of these cookies. But opting out of some of these cookies may affect your browsing experience.
Necessary Always Enabled
Necessary cookies are absolutely essential for the website to function properly. These cookies ensure basic functionalities and security features of the website, anonymously.
Functional
Functional cookies help to perform certain functionalities like sharing the content of the website on social media platforms, collect feedbacks, and other third-party features.
Performance
Performance cookies are used to understand and analyze the key performance indexes of the website which helps in delivering a better user experience for the visitors.
Analytics
Analytical cookies are used to understand how visitors interact with the website. These cookies help provide information on metrics the number of visitors, bounce rate, traffic source, etc.
Advertisement
Advertisement cookies are used to provide visitors with relevant ads and marketing campaigns. These cookies track visitors across websites and collect information to provide customized ads.
Others
Other uncategorized cookies are those that are being analyzed and have not been classified into a category as yet.
SAVE & ACCEPT
Call Now Button